On Lions, Listening, and the Limits of Empathy

The email notification I get tells me that there is still no justice for Cecil, and I am transported back to the summer when I felt the outrage that so many people experienced over what seemed like wanton, unfathomable cruelty to wound a protected animal and cause him to suffer for nearly two days before finally “finishing” him.

I minimize the details that most of us know so well, because I suppose there is nothing more to say about Cecil and the thrill-seeking dentist, whose news cycle ran its course back in July.  (It appears that the most hated man of the moment resumed his dental practice and presumably his life.)  Even at the time, despite the overwhelming empathy for the slaughtered lion, there were those who had had enough of the liberal sentimentality that maybe I am guilty of.  There were of course the hunters (and despite my love of animals, I am not as anti-hunting as I might be—certainly hunting for meat is better than factory farming it—but what kind of “hunting” was this?) and those who wanted to know why the mistreatment of an innocent animal should raise more feelings of outrage than the murder of innocent African Americans.  Both a good question and not so good, since the two scenarios are not equivalent.  Innocence in each case means two different things.  In the latter, we are talking about blamelessness, but the lion is innocent in the sense that, lacking human consciousness, he stands outside of any ethical system.  But I don’t mean to be pedantic.  The important point that must never be obscured is that black people are killed and white people don’t care enough to do something about it.  Empathy is not always a reliable guide or catalyst to correct moral action as it is steeped, in this case, in the racism that still defines America. 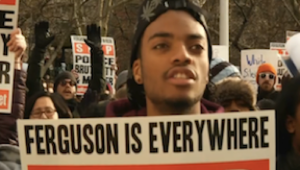 In “Shooting an Elephant” George Orwell raises a similar question, whether consciously or not, when he inspires in the reader more pity for the senseless slaughter of the benign elephant than for the death of the hapless dark-skinned worker who was a casualty of the elephant’s rampage.  By essay’s end, we have forgotten about the corpse (whatever happened to the dead man’s body?  Was he left there in the street?  Did his family collect his remains and mourn him?), except that Orwell reminds us for the sole purpose to reveal the unpleasant truth about his youthful self, that he “was very glad that the coolie had been killed” because it gave him the legally “sufficient pretext for shooting the elephant” and a means of covering up his cowardice.

I can see the killing of Cecil as part of a bigger picture that extends beyond my initial feelings of disgust and compassion: lions are big predators that don’t mix with the colonial legacy of ranching and farming that has been bequeathed to Zimbabwe, the same essential conflict we’ve seen in the western U.S. between ranchers and wolves.  And big game hunting supplements the decimated farming industry and the people who struggle to survive. This greater ecological context matters deeply, but frankly it is disingenuous of me to bring it up.  For in truth, outrage wasn’t what I felt when I heard about Cecil.  What I felt was more basic: nausea, a feeling that Julia Kristeva might identify with a “most elementary and most archaic form of abjection” (2).  A physical sensation that I could not be reasoned or chastised out of by any number of facts or good arguments as to why I should care about bigger things than one lion.  I remember closing out screens and turning down sound as I strenuously tried to avoid receiving the gory details as they trickled in, until finally I was numb enough through habituation to read and hear about the abomination that was one man’s indulgence.

For in some ways it is really the story of the man rather than the lion, and, for me, my reaction to him.   What I felt for this man was hatred so strong that nothing else could creep in—that kind of hatred–the kind that would not allow me to entertain any context beyond the physical repulsion I felt upon seeing the ghoulish photographic spectacle of his grinning face hovering above the severed head of the lion. Lila Abu-Lughod and Catherine Lutz have taught us that emotions don’t just simply exist, that they are culturally produced and transmitted. But they feel like us, they feel, dare I say, authentic, like the real us. My hatred evolved to incomprehension.  What kind of person, who walks among us and carries on the fraternal daily activities of other fellow humans, engages in this?  I share no bond with this man.  It’s impossible for me to recognize him.  I cannot bring myself to call him by his name.  To say that there is an empathy break is an understatement.

The rhetorical principle of kairos might suggest to me that the time to write about this dentist has come and gone, that I’ve missed the moment, it’s passé.  But in truth, it is after some months that I am finally able to entertain the greater contexts that reinsert the frozen moment of disgust back into a fluid timeline that allows a healing process to begin for me.  It is only now that I can write about it, and in so doing bring me to something beyond the revulsion. This is an idea that informs my teaching on writing and healing, something I tell my students and something that we might remember when we bring current events into our classroom.  For the idea of timeliness that kairos implies doesn’t merely mean current—it implies also when we can and can not do something.  It is only now that I can begin to ask myself why, for example, a man posing with a gaffed fish might destroy me less than this picture of the slaughtered lion.  (I’m reminded of Orwell again when he makes the statement that somehow the destruction of a big animal seems a worse crime.)  It is only now that this event can become part of a conversation for me.  That I can write about it.

Kairos is an elusive concept but suggests the powerful ideas of timeliness and appropriateness as guiding concepts in responding to context and audience and implies the improvisational as well as ethical nature of communication.  It involves, then, a sense of flexibility and what we might call an “openness” to circumstances and contingencies.  Not just a tool for the rhetor, kairos is a principle that can guide us as listeners, and the implications for witnessing, when we hear others’ stories, are important, because the concept can suggest a model of receptivity that we can use in the moment when we hear stories that push the bounds of our empathy.  Can I, for a moment in time, adjust my response to hear rather than shut out another’s narrative? Debra Hawhee in her discussion of rhetoric as a bodily art, references a meaning of kairos as the vulnerable opening on a body that archers should aim at: “the fatal spot, that is, is more precisely an opening in the body—a gap or softening in the otherwise protective skeleton, where the arrow can penetrate” (66-67).  Hawhee speaks of this in terms of the agon—the struggle that defines the athletic contest and, as she argues, rhetoric itself.  It is an aggressive, masculinist image, one that requires a victim be part of the scenario, and perhaps an ironic one for me to use in the context of my despair over Cecil, who was hunted with a bow by men seeking this fatal spot.

It is, then, not just an image of precise location but one of vulnerability for the “victim,” this kairotic softening in the protective skeleton.  But a less gruesome picture of the concept might be the archer Cupid, who hunts not to wreak death but desire, in which the violence is mitigated by an openness that produces connection: the opening where we let others in, for better or worse.

For me, this is the bodily essence of kairotic listening, when with our whole selves we open up to another’s words for a moment in time to hear the story we might otherwise exclude.

But at what cost?  No matter the potential benefits, the image of the hunt or battle always contains the core of violence.  Can we afford the vulnerability of the kairotic gap?  I think we can maybe more than we realize, which is what I try to cultivate in students when I train them to listen.  But sometimes we cannot afford it, and that is part of the idea of kairos, too—when and what we can and cannot do.  If the dentist who slaughtered Cecil asked me to hear him, could I allow him to hunt my vulnerability?  If I create a classroom space for people to tell their stories, what happens when I cannot hear without doing harm to myself?

The dilemma isn’t new.  It’s a version of: can we empathize with the perpetrator, the bully, the prison guard, the torturer and to what end?  Is there something to be gained by granting humanity to the monster?  There is, but that still provides no answer.  The dentist remains for me the dentist.  I won’t use his name.  There’s no space in me for him.

The problem extends beyond a narrative writing class.  Our students are always presenting us with stories that we may or may not recognize, that we may be able to afford to recognize, or not.  But it is the writing class where the question of vulnerability resurfaces again and again.  Even our most business-like, rhetoric-steeped courses can produce sites of vulnerability where the selves, and bodies, of students and teachers are at stake.  One of Christopher Harper-Mercer’s victims at Umpqua Community College in Oregon was Professor Levine, the young man’s writing teacher, who, as witnesses remember, “corrected” the troubled student days before the massacre ensued.  For writing teachers, this is the stuff of nightmares.  Perhaps Harper-Mercer’s selection of the writing class was arbitrary, but I find myself speculating about the connection between the word and the body and the self.  Texts are texts, they are not us, as we know, but they bear important and sometimes peculiar relationships to our selves and our lives, and, as with our emotions, they often feel like us.  Intervening in those words is never a simple matter, because regardless of the subject matter, words that we produce that mean something to us are always personal, are always, for all intents and purposes, “us.”

Abu-Lughod, L. and Catherine Lutz. Eds. Language and the Politics of Emotion.